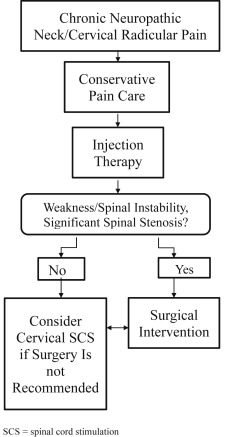 Authors were chosen based upon their clinical expertise, familiarity with the peer-reviewed literature, research productivity, and contributions to the neuromodulation literature. Section leaders supervised literature searches of MEDLINE, BioMed Central, Current Contents Connect, Embase, International Pharmaceutical Abstracts, Web of Science, Google Scholar, and PubMed from 2017 (when NACC last published guidelines) to the present. Identified studies were graded using the US Preventive Services Task Force criteria for evidence and certainty of net benefit. Recommendations are based on the strength of evidence or consensus when evidence was scant.

The NACC examined the published literature and established evidence- and consensus-based recommendations to guide best practices. Additional guidance will occur as new evidence is developed in future iterations of this process.

The NACC recommends best practices regarding the use of cervical neuromodulation to improve safety and efficacy. The evidence- and consensus-based recommendations should be utilized as a guide to assist decision making when clinically appropriate.

Source(s) of financial support: This Neurostimulation Appropriateness Consensus Committee publication was supported by the International Neuromodulation Society , and no authors were paid for their contributions.