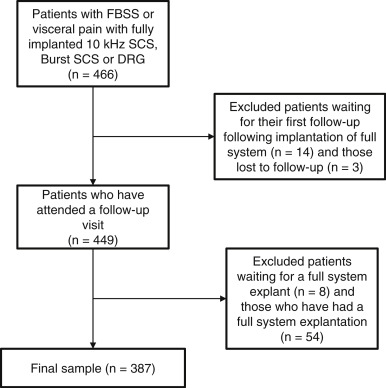 The influence of gender on outcomes in individuals undergoing treatment for chronic pain is unclear. This retrospective, single-site study explored the impact of gender on pain, quality of life (QoL), revisions, and explants in patients with failed back surgery syndrome or visceral pain, who received a fully implanted 10 kHz spinal cord stimulation (SCS), burst SCS, or dorsal root ganglion (DRG) stimulation system.

The final sample comprised 387 patients (176 males and 211 females). Males were significantly older compared to females (mean difference: 2.33 years, p = 0.044). Controlling for age, baseline average pain was significantly lower in males than females (mean difference: −0.32, p = 0.049). Males and females responded equally well to 10 kHz SCS and burst SCS as well as DRG stimulation. A greater percentage of males (5%) than females (1%) had revisions due to lead fractures. Additionally, more females (13%) than males (6%) had an explant due to insufficient pain relief. Female gender and older age were associated with greater likelihood of having an explant compared to male gender and younger age.

Gender may play an influential role in pain severity at baseline but have little effect at follow-up. To help identify which patients may undergo a revision or explant, gender and age could be important factors and should be further scrutinized. Even though men and women responded equally well to SCS and DRG stimulation, more men had a revision due to lead fractures, and more women were explanted due to insufficient pain relief.

Source(s) of financial support: None.