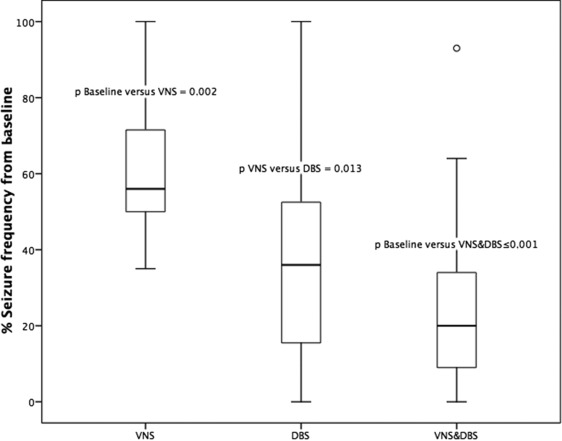 A total of 11 consecutive patients with refractory generalized epilepsy (ten with Lennox-Gastaut syndrome) previously submitted to VNS and who subsequently underwent CMDBS were retrospectively studied. The VNS final parameters were 2 to 2.5 mA, 30 Hz, and 500 μs, cycling mode, 30 seconds “on” and 5 minutes “off” for all patients. The CMDBS final parameters were 4 to 5 V, 130 Hz, and 300 μs, bipolar, continuous stimulation in all patients.

This study showed that combined VNS-CMDBS therapy was able to double the number of responders compared with VNS alone in a cohort of patients with refractory generalized epilepsy. We believe these data represent the first evidence that combined neuromodulation may be useful in this quite homogeneous patient population.

Source(s) of financial support: The authors reported no funding sources.