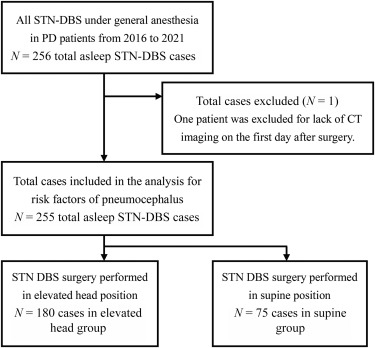 In this study, 255 consecutive patients with PD who received bilateral STN DBS under general anesthesia were retrospectively included. Of these, 180 patients underwent surgery with their heads in an elevated position, and 75 patients underwent surgery in a supine position. The postoperative pneumocephalus volume was compared between the two groups. Other potential risk factors for pneumocephalus also were analyzed.

In patients with PD who were anesthetized and receiving STN DBS, supine positioning reduced pneumocephalus volume compared with patients with PD receiving STN DBS with their heads elevated. The pneumocephalus volume was negatively correlated with intraoperative MAP and positively correlated with the degree of brain atrophy, the lateral trajectory angle, and the MER passage number.

Source(s) of financial support: This study was funded by grants from the National Natural Science Foundation of China (number 81902527) and Guangdong Provincial Scientific Key R&D Program (number 2018B030337001).