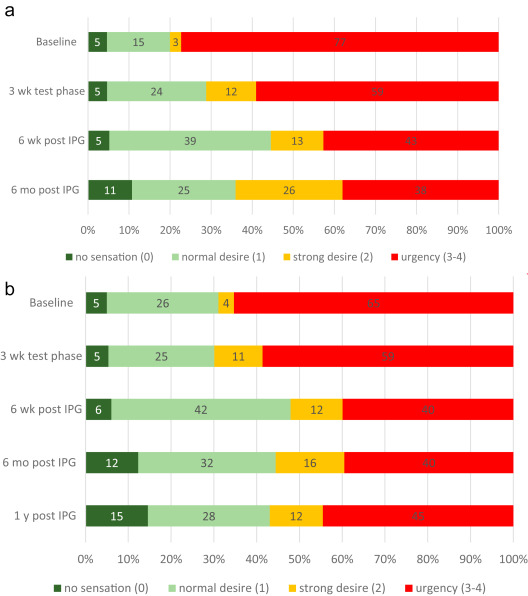 Sacral neuromodulation (SNM) is a well-accepted, minimally invasive modality for patients with overactive bladder (OAB). Successful response to SNM is defined as at least 50% improvement in key symptoms, evaluated in a bladder diary (BD). BDs provide much useful information on bladder behavior during daily life. The aim of this study is to investigate BD parameter changes during SNM therapy in patients with OAB.

The International Consultation on Incontinence Questionnaires (ICIQ)–BD was filled out by 34 patients with OAB, for three days at baseline and after three weeks of subthreshold sensory stimulation. The patients were considered responders for SNM when 50% improvement was seen in the BD. They underwent implantation of an internal pulse generator (IPG), and subsequently, an ICIQ-BD and a visual analog scale (VAS) evaluating bladder satisfaction during three days were filled out six weeks, six months, and one year after IPG implantation.

Source(s) of financial support: The authors reported no funding sources.

Conflict of Interest: Stefan De Wachter is a consultant for Medtronic and receives a research grant from Medtronic. All other authors reported no conflict of interest.