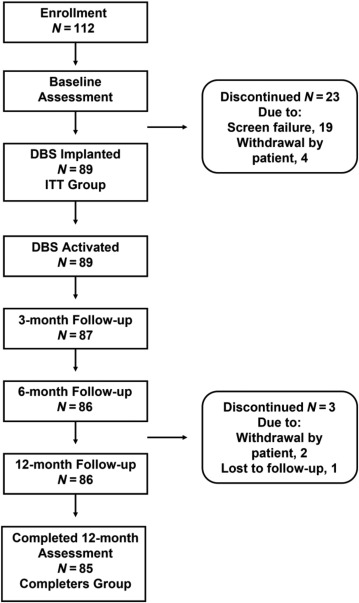 Long-term levodopa use is frequently associated with fluctuations in motor response and can have a serious adverse effect on the quality of life (QoL) of patients with Parkinson’s disease (PD). Deep brain stimulation (DBS) is effective in improving symptoms of diminished levodopa responsiveness. QoL improvements with DBS have been shown in several randomized control trials, mostly in Europe and the United States; however, there is a need for evidence from regions around the world.

The study aimed to demonstrate improvement in PD-related QoL in patients undergoing DBS in a prospective, multicenter study conducted in China.

To evaluate the effect of neurostimulation on the QoL of patients with PD, a Parkinson’s Disease Questionnaire (PDQ-8); Unified Parkinson’s Disease Rating Scale (UPDRS) I, II, III, and IV; and EuroQol 5-dimension questionnaire (EQ-5D) were administered at baseline and 12 months after DBS implantation. The mean change and percent change from baseline were reported for these clinical outcomes.

Assessments were completed for 85 of the 89 implanted patients. DBS substantially improved patients’ QoL and function. Implanted patients showed statistically significant mean improvement in PDQ-8 and UPDRS III (on stimulation/off medication). In the patients who completed the 12-month follow-up visit, the percent change was −22.2% for PDQ-8 and −51.6% for UPDRS III (on stimulation/off medication). Percent change from baseline to 12 months for UPDRS I, II, III, and IV and EQ-5D were −16.8%, −39.4%, −18.5%, and −50.0% and 22.7%, respectively. The overall rate of incidence for adverse events was low at 15.7%. Favorable outcomes were also reported based on patient opinion; 95.3% were satisfied with DBS results.

These data were comparable to other studies around the world and showed alignment with the ability of DBS to meaningfully improve the QoL of patients with PD. More studies investigating DBS therapy for patients with PD are necessary to accurately characterize clinical outcomes for the global PD population.

The ClinicalTrials.gov registration number for this study is NCT02937688.